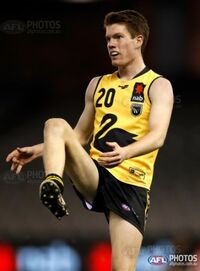 After going undrafted in 2017, Foley played as an overager for WA in the under-18 competition and dominated for Subiaco in the colts. On being drafted, he was described as having a high work rate and strong athletic background, and coming from a long line of Foley footballers, his great-uncle Brian Foley having captained West Perth and won a Sandover Medal in 1959 and cousin Dan Foley playing for Richmond and West Perth in the 1980s.[1]

He began his West Coast career as a rotating midfielder in the club's WAFL reserves side, but found his feet after a shift to the backline during the season. Despite being unable to play WAFL during the pandemic-affected 2020 season, Foley showed enough form in scratch matches to receive a call-up for his senior debut in the final round of the season.

22/8/20: Another debutant for Eagles with Foley named

Retrieved from "https://eaglepedia.fandom.com/wiki/Luke_Foley?oldid=34368"
Community content is available under CC-BY-SA unless otherwise noted.