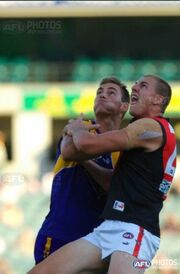 A powerfully-built ruckman, Llane Spaanderman spent a season on the West Coast rookie list after two seasons at Brisbane.

Spaanderman was a second-round pick in the 2003 national draft, and spent 2004 playing with Brisbane's reserves before making his senior debut in 2005. He was delisted at the end of that season after just three games.

Spaanderman returned to East Perth for the 2006 season, before being picked up by West Coast in the 2007 rookie draft as insurance for Dean Cox and Mark Seaby. During the season, which he spent with the Royals, he faced court on burglary charges stemming from an incident shortly after he had been let go by Brisbane, for which he was found guilty and fined.[1]

Spaanderman crossed to Swan Districts for the 2008 season and led the Swans' ruck for four years, including the victorious 2010 grand final. He switched to Perth in 2012, before playing for a series of local and country teams. In 2018 he lined up for the Daniel Kerr-coached Thornlie.[2]

Retrieved from "https://eaglepedia.fandom.com/wiki/Llane_Spaanderman?oldid=26478"
Community content is available under CC-BY-SA unless otherwise noted.