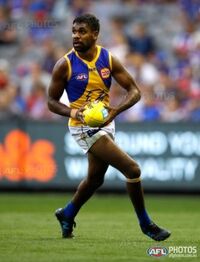 Excitement machine Liam Ryan was West Coast's third selection in the 2017 draft, and played in a premiership in his first season.

Originally from Geraldton, Ryan burst onto the WAFL scene in 2016 when he kicked 40 goals for Subiaco and put in several efforts for Mark of the Year. Surprisingly overlooked in the draft, he followed up with a league-leading 73 goals in 2017 while putting at ease questions about his maturity and work ethic.

Picked to debut in Round 1, Ryan quickly became a fan favourite, kicking seven goals in his first three matches before suffering an ankle injury. After an extended layoff he returned to the side briefly before an early-morning car crash that resulted in drink driving charges and a stint with East Perth. Ryan regained his senior spot late in the season and rediscovered his electrifying ways, becoming a part of the Eagles' premiership side.

Ryan started the 2019 season in strong form, playing further up the ground with his defensive efforts and tackling pressure particularly notable. He took Mark of the Year over ruckman Max Gawn late in a clash against Melbourne, with his subsequent goal putting West Coast ahead in a close contest. Ryan, who played every game for the year, added a second MotY contender late in the season, hurling himself back with the flight of the ball into an oncoming pack against Carlton, and was rewarded at the end of the year with a top-ten finish in the John Worsfold Medal count.

His rapid improvement continued in 2020, with Ryan earning All-Australian selection with a superb season in which he kicked 26 goals and was one of the league leaders in score involvements.

Retrieved from "https://eaglepedia.fandom.com/wiki/Liam_Ryan?oldid=35197"
Community content is available under CC-BY-SA unless otherwise noted.