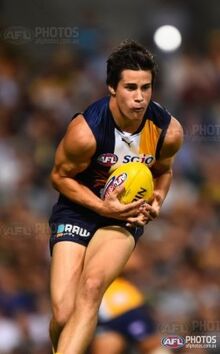 Classy Victorian product Liam Duggan was West Coast's first pick in the 2014 national draft and made an immediate impact at senior level.

A left-footed midfielder, Duggan was linked to Gold Coast pre-draft but slipped to pick 11. On being drafted, he was described as having excellent decision-making skills, poise and ball use.

Duggan began his rookie season with East Perth but was quickly injected into the senior side, making his debut in Round 2. Often used as the sub, he impressed with his silky skills and willingness to hit the contest hard despite his slight stature. Duggan played a dozen games straight, but his form tailed off and he was sent back to the Royals, where he unfortunately suffered a knee injury that ended his season early.

The young midfield prospect failed to take the next step many expected in 2016. Although he played the first 12 games he was dropped after struggling for form, and managed just two more games late in the year. He then had a slow start to the 2017 season after being forced to earn a spot in the senior side through the WAFL and getting only limited midfield minutes, but a move to the backline against Geelong just after the bye sparked a massive improvement, with Duggan becoming a fixture in defence for the rest of the year and being named the Rookie of the Year, before signing a long-term deal on the eve of the 2018 season.

A regular in defence in 2018, Duggan played nearly every game and impressed with his ability to lock down on small forwards as well as create drive out of the backline, and was a solid contributor during the victorious Grand Final. He suffered an ankle injury in the back half of 2019 and, although he was able to return to action, he lost his spot in the senior side for the finals.

Duggan bounced back to have a career-best year in 2020, playing all but one game and recording a maiden top-five finish in the John Worsfold Medal as he made his 100th appearance late in the year.

Retrieved from "https://eaglepedia.fandom.com/wiki/Liam_Duggan?oldid=35301"
Community content is available under CC-BY-SA unless otherwise noted.