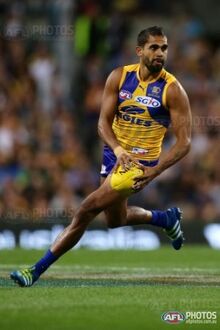 Quick outside midfielder Lewis Jetta joined West Coast after 127 games with Sydney, but struggled initially before finding a new role as a sweeping half-back.

Originally from Bunbury, Jetta won a colts premiership with Swan Districts in 2007 but was overlooked in that year's draft. After a season with the Bridgetown Bulldogs, he returned to Swans in 2009 and became a top prospect in the draft. West Coast reportedly considered him at pick 7 but opted for Brad Sheppard, with Jetta going seven picks later to the Swans.

Jetta's best season with Sydney came in 2012, when he led the Swans' goalkicking with 45 majors and played an important role in the side's premiership run. He achieved some notoriety with West Coast fans when the sides clashed at Subiaco in 2015 when he performed a "spear-dance" after a goal in protest of the crowd's treatment of Sydney's Adam Goodes.

At the end of 2015 Jetta, who was out of contract, told Sydney that he wished to return to Western Australia and was traded to West Coast in a straight swap for ruckman Callum Sinclair.

The big-name recruit failed to live up to his billing in his first season at the Eagles, managing just 12 games, struggling to have any impact on games and getting dropped back to East Perth on multiple occasions.

Those struggles continued early in 2017 and Jetta had an extended run at East Perth. Once recalled, he finally began to show the scintillating running for which he was recruited, averaging 22 possesions and a goal a game in his first month back. While he continued to fade out of games at times, Jetta also had some big moments, kicking a crucial goal late in Round 23 2017 to lift the Eagles into the top eight.

A move to defence worked wonders for Jetta in 2018, with the speedster finding a new lease of life and providing creative dash out of the backline. Despite battling calf issues, he played 20 games and again bobbed up for a vital goal in the qualifying final against Collingwood, before becoming a dual premiership player three weeks later. He was also awarded the Chris Mainwaring Best Clubman trophy in recognition of his work with the Wirrpanda Foundation and his mentoring of young indigenous teammates Liam Ryan and Willie Rioli. He continued in his role as a sweeping defender and senior mentor in 2019, playing 22 games.

Retrieved from "https://eaglepedia.fandom.com/wiki/Lewis_Jetta?oldid=32726"
Community content is available under CC-BY-SA unless otherwise noted.