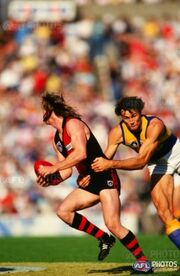 The beanpole Keene was one of the real hard-luck stories of West Coast’s early years, a chronic Achilles injury severely curtailing his impact at the top level.

Strong and particularly mobile for such a big man, Keene was an outstanding performer with Subiaco prior to the formation of the Eagles. He had a stellar 1986 in particular, winning the Lions’ best and fairest, a WAFL premiership and All-Australian selection.

Unsurprisingly Keene was part of the inaugural Eagles side that took on Richmond, and has the distinction of kicking the club’s first goal. He added another two that day, and a few weeks later against Carlton bagged half a dozen. He finished with 25 for the season from 17 games.

In 1988 he spent more time in the ruck, kicking just 7 goals from his 12 games. Despite missing chunks of the season he managed to string 8 games together at the tail-end of the year and hit some good form during this time. The versatile Keene kicked 5 against the Bears, hauled in 15 marks a month later against the Saints (earning maximum Brownlow votes) and took another 9 in West Coast’s first-ever final against Melbourne.

The Achilles problems surfaced early in 1989. Keene went down in round 2 against Geelong, and wasn’t to appear again until the final round of the 1990 season. He managed to stay on the park for the 1990 finals series, but the recovery was short-lived. The popular Keene missed the whole of the 1991 season due to the ongoing problems, and despite trying just about anything he was unable to make it back in 1992, eventually forced to call a premature end to his AFL career after 36 frustrating games.

Keene managed to return for a handful of games with Subiaco in 1994.

Retrieved from "https://eaglepedia.fandom.com/wiki/Laurie_Keene?oldid=22894"
Community content is available under CC-BY-SA unless otherwise noted.