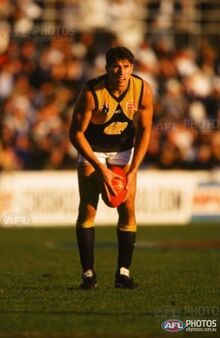 Hailing from Carnarvon in the state’s northwest, Laurie Bellotti was a talented junior basketballer who was picked up in the rookie draft as a 22-year-old after showing promising signs at Claremont.

A versatile and agile big man, Bellotti spent the 1998 season at Claremont without making his debut but was nevertheless promoted to the senior list at the end of the season.

Bellotti made his debut early in the 1999 season and played 18 games for the year, primarily as a key back and pinch-hitting in the ruck. His most notable performance came in just his fourth senior match when he performed a solid shutdown job on danger Bulldog Chris Grant.

After only managing 9 games the following season, Bellotti was delisted at the end of the year.

After being cut from the Eagles’ squad Bellotti shifted from Claremont to West Perth for the 2001 season before heading north to Karratha and playing for the Karratha Falcons in the Northwest Pilbara Football League.

Retrieved from "https://eaglepedia.fandom.com/wiki/Laurie_Bellotti?oldid=23657"
Community content is available under CC-BY-SA unless otherwise noted.