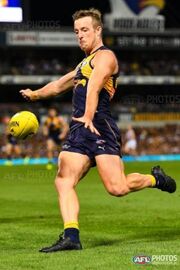 Victorian Kurt Mutimer played a handful of games after being selected with West Coast's third pick in the 2015 national draft.

Hailing from Narre Warren, the left-footed Mutimer represented Vic Country and Dandenong. On being drafted, he was described as a midfielder with a penetrating kick and good natural pace.

His pre-season and first month of the 2016 season was wiped out by a hamstring injury, but after working his way up through the reserves, Mutimer played eight senior games for East Perth including the losing elimination final.

Mutimer earned a senior debut in 2017 after some strong early-season form in the WAFL, and played four games in an unfamiliar role as a defensive forward. His performances tapered off when he returned to East Perth, however. He had a quiet 2018 and although he showed solid form playing as a lock-down defender with the Royals, he failed to press for further AFL duties. Mutimer spent 2019 with the Eagles new standalone reserves side, starting in the backline before shifting into the midfield later in the year, but did not press for senior selection and was delisted at the end of the year.

Mutimer returned to Victoria, signing with VFL side Casey Demons for the 2020 season.[1]

Retrieved from "https://eaglepedia.fandom.com/wiki/Kurt_Mutimer?oldid=31785"
Community content is available under CC-BY-SA unless otherwise noted.