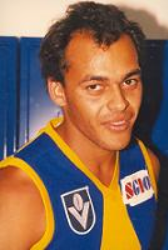 Originally from Darwin, Kevin Caton was playing for Swan Districts when he was recruited by John Todd (along with half of the Swans team) to West Coast for the 1988 season.

The athletic utility managed just one game, at Subiaco against the Demons. He kicked a goal from his 12 possessions but couldn’t maintain his spot and was ultimately delisted at the end of the season.

Fitzroy then picked up Caton in the pre-season draft and he played 9 games for the Lions before shifting to Brisbane for the 1990 season and playing 8 games in maroon and yellow.

After leaving Brisbane Caton returned to Swan Districts, where he won the Bernie Naylor medal as the WAFL’s leading goalscorer in 1992.

Retrieved from "https://eaglepedia.fandom.com/wiki/Kevin_Caton?oldid=23007"
Community content is available under CC-BY-SA unless otherwise noted.