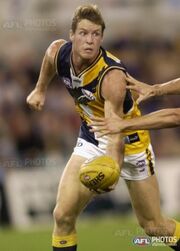 A late-round rookie pick in the 2000 rookie draft, Green was elevated late in the 2000 season and made his debut in a big loss to the Swans at the SCG. He played the final 6 games of the season and was promoted permanently to the senior list at the end of the year.

2001 was a case of déjà vu, with Green again playing his first game for the year against Sydney in round 17 and again going on to play the final 6 games. Used mainly as a defender, Green played 13 games in 2002, including the final 9 games of the regular season and the club’s drought-breaking elimination final against Essendon.

2003 was Green’s best season as an Eagle, with the utility cementing a spot in the backline and playing 20 games for the year. Early in 2004 he chalked up his 50th game in the Western Derby, but in the following match he copped a lengthy suspension for kicking Melbourne’s Cameron Bruce. He resumed with East Fremantle following that suspension, and didn’t return to the senior side until more than a year later, when was recalled for another derby and managed two late-season games before again being dropped back to the Sharks.

Listed as an emergency when the Grand Final teams were named, Green was a surprising addition to the team on gameday in place of the injured Phil Matera. Despite being plucked from obscurity, Green did a solid job on the dangerous Ryan O’Keefe as West Coast went down in heartbreaking circumstances.

That was Green’s final appearance in West Coast colours. The utility was delisted at the conclusion of the season but was then picked up by North Melbourne in the national draft.

Green proved a useful addition to the Kangaroos, playing 39 games in two seasons before retiring after the Roos’ big 2007 preliminary final loss to Port Adelaide.

Green returned to captain East Fremantle for three seasons before retiring from the WAFL in 2010.

Retrieved from "https://eaglepedia.fandom.com/wiki/Kasey_Green?oldid=28816"
Community content is available under CC-BY-SA unless otherwise noted.