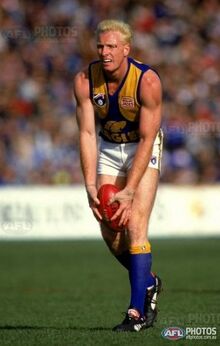 A big and aggressive forward, “Boris” Langdon was an integral part of the team’s forward line in the early 1990s. Typically when he wasn’t kicking goals, he was creating them for teammates with his strong bullocking work.

Langdon played in a WAFL premiership with Subiaco in 1986 and a losing grand final in 1987 before joining the West Coast Eagles for their second season. He made his debut in the first round of 1988 in Geelong, just days after his 20th birthday. Langdon kicked 15 goals in 14 games in his rookie season, and quickly became something of a cult figure due to his bleached blonde hair and combative style. Highlights included a late-season 28-possession effort against Collingwood that netted the first 3 Brownlow votes of his career, and playing in the club’s historic first final against Melbourne.

He played another 14 games in 1989 but had a real breakout year in 1990, kicking 39 goals from 25 games and providing a strong foil for full-forward Peter Sumich. Langdon received another best-on-ground from the umpires for a three-goal haul against the Saints, and equalled his personal best with 4 goals against Richmond. It culminated in a top-10 finish in the Club Champion award for the only time in his career.

Boris played another big part in the 1991 season, playing 18 games including the qualifying loss to Hawthorn and the semi-final win over Melbourne, although he took little part in that win after being injured early and missed the remainder of the finals series (including the Waverley grand final) as a result.

In 1992, Langdon played 21 games, kicked a few bags of three goals and put in a monumental effort against Carlton in the final round of the season, picking up a season-high 21 possessions and a mammoth 13 tackles. It meant he hit the finals series full of running, and played his part in the club’s historic first grand final victory.

Sadly for Boris, that was all but the end of his AFL career, a knee injury restricted him to just 1 game in 1993 and although he remained at the club for another two years he was unable to recapture a regular place in the side ahead of youngsters like Mitchell White and Jason Ball. Langdon managed just three games in the middle of the premiership-winning 1994 season and then another four games midway through the 1995 season, the last of which took him to the 100-game mark. He retired from all levels of football after Subiaco’s 1995 Grand Final loss to West Perth.

Following his football career the flamboyant Langdon went into the media where he has become a prolific figure, appearing on 6PR radio, some curtains ads and as the ground announcer at West Coast match days at Subiaco.

Retrieved from "https://eaglepedia.fandom.com/wiki/Karl_Langdon?oldid=28589"
Community content is available under CC-BY-SA unless otherwise noted.