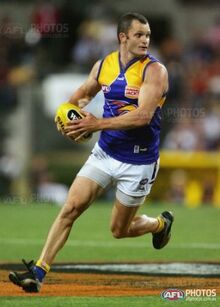 A defensive-minded midfielder also capable of playing as a lockdown back pocket, Josh Wooden spent 11 years at the club but fell just short of the 100-game milestone.

Hailing from Lockhart, just outside of Wagga in New South Wales, “Pinocchio” (the little Wooden boy) was picked up with one of the compensation picks West Coast received for Ian Downsborough.

Wooden made an instant impact in his first season, debuting in the first round of 1997 and playing 18 games for the season including the semi-final against North Melbourne. His strong performance for the year saw him receive the club’s Rookie of the Year award ahead of Michael Gardiner and Phil Matera.

Wooden spent the next four years coming in and out of the side for one reason or another, adding just 38 games to his tally in that time.

2002 was his finest year at AFL level, as he played 19 games including the elimination final and was adjudged best afield by the umpires in a midseason win over Sydney.

Unfortunately for Wooden, he went backwards in the selection mix after that, struggling to break into the star-studded midfield of the mid 2000s. He played just 9 games in each of 2003 and 2004 although his patience was rewarded with the Best Clubman award in 2004.

After starting 2005 on 93 games, if you had told him he’d be at the club for another three seasons he probably would have been fairly confident of reaching the century. It wasn’t to be however; Wooden played just 1 game in 2005, 2 in the premiership year of 2006 and none at all in 2007 as he suffered from a combination of a nagging hip complaint and the strong depth of the squad.

Having been allocated to Subiaco when he first came West, Wooden coached the club’s reserves before taking over as head coach of amateur club Swan Athletic in 2013.

Retrieved from "https://eaglepedia.fandom.com/wiki/Josh_Wooden?oldid=32970"
Community content is available under CC-BY-SA unless otherwise noted.