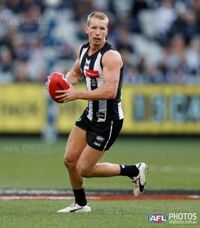 Originally from Toowoomba, west of Brisbane deep in the heart of rugby territory,[1] Smith was a mature-age draftee when he was plucked from NEAFL club Redland in the 2016 rookie draft. He debuted for the Magpies on Anzac Day and held his spot for the rest of the season, finishing with 18 games.

Smith added 13 senior games in 2017, but managed just one more as his 2018 was wrecked by hamstring issues, and was delisted at the end of the year.[2]

The former Pie was thrown a lifeline by West Coast in the rookie draft, and made an instant impression at his new club when he won the squad's pre-season time-trials in December and January.[3] He was called up to make his West Coast debut early in the season, and made one other senior appearance. Smith showed good form with the Eagles' reserves side before suffering a hamstring injury late in the season, returning for the WAFL finals. He was not offered a new contract at the end of 2019.

Smith returned to Victoria in 2020 but was unable to play football due to the coronavirus pandemic. He joined Perth for the 2021 season.[4]

Retrieved from "https://eaglepedia.fandom.com/wiki/Josh_Smith?oldid=34704"
Community content is available under CC-BY-SA unless otherwise noted.