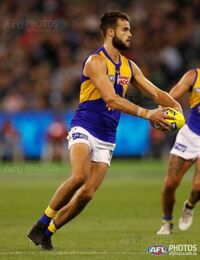 Originally from the Whitford juniors, Rotham supported the Eagles growing up and spent time at the club as part of the AIS-AFL academy program. On being drafted he was described as a speedy athletic defender capable of taking a second or third tall forward or potentially moving up the ground onto a wing.

2017 was spent as a development year, with Rotham playing primarily off half-back for East Perth. A hamstring injury interrupted his progress and he finished the year in the reserves. He spent 2018 in the Royals' senior side, often matching up on key forwards, and traveled with the AFL side as an emergency on one occasion.

After two years with the Royals, Rotham made his senior debut against Collingwood early in the 2019 season, replacing an injured Liam Duggan, and acquitted himself well in the meeting between the previous year's grand finalists. He played the following week but was then squeezed out, keeping pressure on the senior backline with strong performances at WAFL level and making two more senior appearances later in the year.

Rotham forced his way into the side early in 2020 and played ten games for the year, becoming a reliable member of the back six. He missed the club's only final due to injury but was awarded the Emerging Talent trophy at the end of the season.

Retrieved from "https://eaglepedia.fandom.com/wiki/Josh_Rotham?oldid=34364"
Community content is available under CC-BY-SA unless otherwise noted.