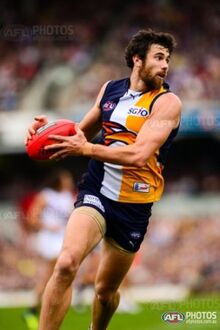 Powerful key forward Josh Kennedy has established himself as one of the best spearheads in the AFL after crossing from Carlton in the Chris Judd trade.

Originally from Northampton, Kennedy played senior football for East Fremantle at 17 before being a top-4 pick for Carlton in the 2005 draft.

He played 22 games for the Blues in two seasons, kicking 11 goals. At the end of 2007 when Chris Judd announced he was shifting to Carlton, West Coast named Kennedy as the player they wanted in return. Somewhat reluctantly, Kennedy agreed to the trade and became an Eagle, shifting back to his home state.

Kennedy was initially made to earn his spot through the WAFL, with the match committee preferring Quinten Lynch, Ashley Hansen and even Chad Jones. He eventually received a call-up after a couple of good hauls for the Sharks, playing the next five games and kicking seven goals before suffering a knee injury that kept him out for a month. He returned for a couple of rounds but was clearly still bothered by the knee and ended up being packed off for surgery.

His 2009 season got off to a slow start due to a foot injury, with the big Northampton lad having to make his way through the WAFL. After eventually being promoted in round 7 in place of an out-of-form Hansen, Kennedy played the rest of the season, with his 31 goals second at the club behind the year's break-out star Mark LeCras. Proving effective as a lead-up forward, Kennedy finished in the top 10 in the Club Champion award for the first time.

Now a permanent part of the senior side, Kennedy played every game in 2010, forming an effective partnership with LeCras. Kennedy kicked a few big bags including a personal best of 6 against the Hawks, and finished with 41 goals and sixth place in the club best and fairest. He also impressed with his willingness and ability to chase opponents inside the forward 50, remarkable for such a big man.

In 2011 Kennedy became the main focal point of the forward line, kicking 59 goals including one game at Subiaco where he completely destroyed the Bulldogs' backline in booting 10 goals. He looked set to become even more imposing in 2012, again terrorising the Dogs for 7 goals in the opening round, before breaking a foot in round 5 and missing most of the rest of the season. Kennedy returned late in the year but was still hindered by his foot, managing just six goals in four games.

With LeCras coming back from a knee reconstruction in 2013, the Eagles desperately needed Kennedy to stand up and he delivered in spades, kicking 59 goals in his first 17 games to lead the Coleman Medal race heading into the last month of the season until a disastrous drop-off in form saw Kennedy add just one more goal in the final four rounds.

2015 was a career-best year for the popular spearhead, who won the Coleman Medal in a canter and finished with 80 goals, the most by an Eagle since Scott Cummings' own Coleman year in 1999, despite suffering an elbow injury mid-year and being forced to play with heavy strapping from then on. Kennedy won All-Australian selection (as vice-captain) and finished third in the best and fairest as well as taking home the Chris Mainwaring Best Clubman trophy.

He somehow managed to improve on that in 2016, getting off to a flying start with 8 goals from a career-high 16 marks against the Lions. Although he did not better that haul for the year, Kennedy had eight bags of 5 or more goals and won his second straight Coleman Medal, as well as finishing runner-up to Worsfold Medalist Luke Shuey.

Kennedy's bid for a third straight Coleman in 2017 was thwarted when he missed five games with a calf injury mid-season. Although he booted 30 goals in his first six games back to re-take the lead, he ended up in second place on the league's goalkicking table, though he was once again named vice-captain of the All-Australian team.

Persistent leg injuries delayed Kennedy's start to 2018 and limited him to just 14 games, costing him the chance of registering a record-breaking sixth straight season as the club's leading goalscorer. He managed 43 goals from those 14 games, overtaking Peter Sumich as the Eagles' all-time leading goalscorer, and kicked three in a strong Grand Final performance as the club won its fourth flag.

Kennedy overcame an interrupted pre-season in 2019 to play almost every game, although he showed signs of slowing, going goalless in consecutive matches for the first time since 2013. He was still capable of match-winning hauls, including a seven-goal effort against North Melbourne that put him beyond 600 career goals. Kennedy hit a purple patch midway through the the pandemic-shortened 2020 season, leading the Coleman Medal for a period after kicking 15 goals in three weeks, and ended the season as the club's leading goalscorer for the seventh time in his career.

Retrieved from "https://eaglepedia.fandom.com/wiki/Josh_Kennedy?oldid=35305"
Community content is available under CC-BY-SA unless otherwise noted.