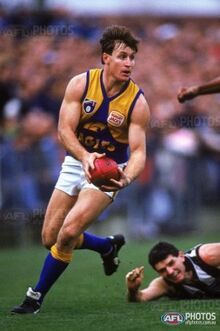 One of the most influential people in West Coast history, John Worsfold has been on the dais in all three of the Eagles’ premierships to date, either as captain or coach, and holds the club records for both games as captain (134) and games as coach (259). Despite being a fairly small-statured player, and having the appearance of a mild-mannered pharmacist away from the footy field, Worsfold was one of the most physically intimidating players ever to pull on a jumper. He was unwaveringly hard, fearless and courageous, and made an art-form of the hip-and-shoulder.

Woosha was a star junior player at South Fremantle and one of the “Magnificent Seven” (along with McKenna, Lewis, Sumich etc) that helped WA to the 1985 Teal Cup. He won the WAFL’s rookie of the year award in 1986 before being added to the inaugural Eagles list. Originally a midfielder, Worsfold made his VFL debut as an 18 year old early in the 1987 season and played 11 games for the year.

The Eagles’ second season was Worsfold’s breakout year. Still a teenager, Woosha led the team in disposals, marks and tackles and won the Club Champion Award. He followed that up with a solid 1989, playing 20 games and finishing fifth in the best and fairest after being named as Murray Rance’s vice captain at the start of the year.

In 1990 Worsfold was again prominent. Now a permanent fixture on the half-back line, he played 23 games and took the captaincy in controversial circumstances when the incumbent Steve Malaxos was dropped for the semi-final against Melbourne. Amidst the turmoil Woosha led the team to victory, but they bowed out the following week against Essendon.

Appointed the full-time captain for 1991, at just 22 years of age, Worsfold led his charges to a 19-3 record in the home and away season and a maiden grand final appearance. The following year he and the team went one better, and Woosha and Mick Malthouse were handed the premiership cup, creating history as the first non-Victorian club to win the flag.

The 1993 season was fairly uneventful by comparison, although Worsfold did take advantage of spending some rare time further up the ground by picking up 27 touches and 3 goals in a win over Adelaide. In 1994, while his personal form was relatively patchy the inspirational skipper was again on hand to receive the premiership cup.

Woosha’s form tailed away in the last few years of his career, not helped by a serious knee injury that wrote off almost his entire 1996 season. It reached a nadir on the eve of the 1998 finals series when the captain was unceremoniously dropped by Malthouse, in an eerily similar situation to that his predecessor Malaxos had found himself. West Coast lost the match and bowed out of the finals, and Worsfold never played again, announcing his retirement during the off-season. His retirement no doubt came as a massive relief to opposition players across the league.

After a brief stint in the media, Worsfold joined Carlton as an assistant coach in 2000 before taking the head coaching job at West Coast in 2002. As coach, he led the side to six consecutive finals appearances, two Grand Finals and the 2006 flag. He announced his retirement at the end of a difficult 2013 season, stepping down after 12 seasons as the club’s head coach, following on from his 12 seasons as a player (8 as captain).

His departure paved the way for West Coast to finally christen its Best and Fairest award the John Worsfold Medal, a worthy honour befitting the man who has been at the centre of all of the club's success.

After sitting out of football for a period, Worsfold took a role at Adelaide as director of coaching during the 2015 season, supporting interim coach Scott Camporeale after the shock death of incumbent Phil Walsh. The role reignited his passion for coaching, and he successfully applied for the vacant head coaching job at Essendon.

Retrieved from "https://eaglepedia.fandom.com/wiki/John_Worsfold?oldid=28661"
Community content is available under CC-BY-SA unless otherwise noted.