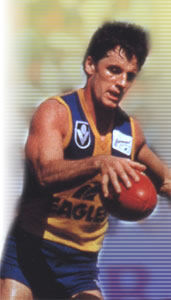 A supremely fit and determined midfielder, John Annear was an important addition to the inaugural West Coast list, providing drive and experience in the club's formative years.

Annear was originally a Claremont Tiger before being enticed to Victoria by Collingwood for the 1981 season. He played 43 games in three years at Victoria Park before switching to Richmond at the end of 1983.

Annear finished runner-up to ruckman Mark Lee in his first season at Tigerland and was a regular member of the Tiger midfield brigade in the mid-1980s. After three seasons and 65 games in black and yellow, Annear was lured home to join the inaugural West Coast squad at the end of 1986.

Annear played every game in the club’s first season and finished in the top 10 in the best and fairest count that year. He turned in some impressive performances during the season, including a demolition job on the Kangaroos to the tune of 34 touches and 5 goals.

Given Rob Wiley’s number 2 jumper after the veteran’s retirement, Annear had another strong season in 1988, again finishing in the upper reaches of the best and fairest although unfortunately missing the club’s first finals appearance due to injury.

Injury began to catch up with Annear in 1989 and some of the younger midfielders started to move past him in the pecking order. He played just 13 games in 1989 and added four more in 1990 before calling it a day.