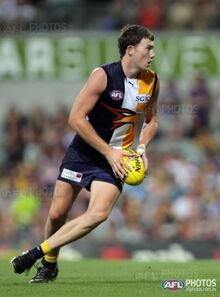 Despite not yet playing a senior game, athletic key position player Jeremy McGovern was promoted to the senior list in 2013 after three years as a rookie. He had an immediate impact on debut, showing himself to be able to hold down a key position at either end, before settling into the backline and becoming a champion defender.

The son of former Fremantle defender Andrew, Albany product Jeremy McGovern was picked up by West Coast late in the 2011 rookie draft. Injuries and a strong league side kept him in Claremont's reserves team for 2011, where he played in the second-grade premiership.

McGovern made his league debut in the opening round of 2012 and was a strong contributor for the Tigers in the forward line and as a backup ruckman. He caught the eye with a four-goal, nine-mark haul in a national Foxtel Cup game and won a second premiership medal, this time in the seniors.

After a strong start to 2013, a broken ankle put McGovern out for an extended period. He returned through the reserves and once again performed on the national stage, kicking 3 goals and clunking 11 marks in a Foxtel Cup game against Southport, before his season was ended by hip surgery.

Having done the maximum three years on the rookie list, McGovern was promoted to the seniors for 2014, although he got off to an inauspicious start when he arrived at pre-season training out of shape. When the WAFL season started McGovern was trialled in the backline to good effect, and made his long-awaited AFL debut in that role against Carlton as a replacement for skipper Darren Glass. His next appearance was six weeks later in Launceston as a forward where he impressed with 15 possessions, 10 marks and 2 goals, following it up with 3 goals and a game-saving mark against Gold Coast. McGovern played out the remainder of the year, kicking 13 goals in his first seven games before shifting to the backline in the latter part of the season, and was rewarded with the club's Rookie of the Year award and with the number 20 jumper vacated by games record holder Dean Cox.

McGovern was forced to play as a key back throughout 2015 thanks to injuries to Eric MacKenzie and Mitch Brown. He performed admirably, to the point he was named in the extended All-Australian squad, despite suffering a number of injuries of his own, most notably a hamstring issue that caused him to miss a month and an AC-joint injury that troubled him throughout the finals.

He continued his meteoric rise in 2016, holding down the centre-half-back position despite the return of MacKenzie and Brown, and establishing himself as one of the premier intercept marks in the league. McGovern's second strong season in the backline was rewarded with a maiden All-Australian jumper as well as his first top-10 finish in the Club Champion award.

McGovern continued to cement his reputation as one of the league's best key backs in 2017, with the Claremont product finishing runner-up in the best and fairest and being named as an All-Australian for the second straight year, despite having to occasionally fill in up front and in the ruck. He had an eventful 2018, setting a league record for intercept marks, bringing up his 100th appearance late in the year, and drifting forward to kick a game-winning goal after the siren against Port Adelaide. McGovern was a key player in the side's victorious Grand Final, taking an intercept mark that led to Dom Sheed's game-winner, with the big defender adding a premiership medal to his third All-Australian selection. It was later revealed that he had spent time in hospital in the lead-up to the Grand Final with internal bleeding after suffering a corked hip pointer the previous week.[1]

In 2019, McGovern continued to be a distraction to opposing forward lines, with teams actively changing their strategies to avoid his intercept marking ability. Despite that, and a suspension for pushing Essendon opponent Matt Guelfi into a Perth Stadium fence, he was named an All-Australian for the fourth straight year. His 2020 was subject to repeated interruptions in the form of a controversial suspension and ankle and hamstring injuries.

Retrieved from "https://eaglepedia.fandom.com/wiki/Jeremy_McGovern?oldid=35309"
Community content is available under CC-BY-SA unless otherwise noted.