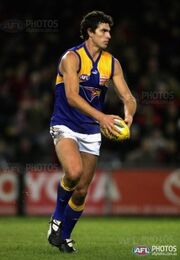 One of footy’s genuinely good guys, Jaymie Graham was also one of the unluckiest players to pull on a West Coast jumper.

Hailing from Kalgoorlie, Graham was picked up in the rookie draft in advance of the 2004 season, but spent the year at South Freo. He was given a big league debut in the first Western Derby of 2005 and responded with two goals. After a quiet performance the following week he went back to the Bulldogs for the remainder of the season, winning a WAFL flag.

Elevated to the senior list over the next off-season, Graham had a fantastic year in 2006. He played every game during the home and away rounds, proving to be a valuable asset capable of pinch-hitting as a key position player at either end of the ground. Standout performances included a 3-goal haul in a narrow win over the Crows in Adelaide, and racking up 23 touches and 14 marks against the Magpies at Subiaco.

After being cast in the unfamiliar role of backup ruckman in the first qualifying final loss to Sydney, Graham found himself on the sidelines for the first time all year during the sudden death semi against the Bulldogs. He was recalled, along with veteran Drew Banfield, for the trip to Adelaide to take on the Crows in the preliminary final in place of an injured David Wirrpanda and an unlucky Matt Rosa. With Wirrpanda fit to regain his place for the Grand Final, Banfield and Graham faced an anxious wait to see who would make way. The match committee plumped for the experienced Banfield against a smaller Sydney forward line and Graham watched on as his teammates won the club’s third premiership.

Although he missed out on a premiership medal, his breakout season was rewarded with the club’s rookie of the year award. 2007 was a disappointing follow-up, Graham playing just 5 senior games and only a handful more with South Fremantle as he struggled to overcome injury. After a similar season in 2008, adding just 6 more AFL games to his tally and missing games through injury, the 25-year-old Graham announced a surprise retirement, citing family reasons for the decision. The much-liked player received the Best Clubman award as a parting gift, which had been renamed in honour of Chris Mainwaring the previous year.

Graham continued playing for South Fremantle before an horrific knee injury brought a premature end to his playing days early in the 2011 season. Graham’s leg was trapped under a Subiaco opponent’s body in a scramble for a loose ball and he suffered an ACL rupture and a badly dislocated kneecap.

Unable to continue playing, Graham is forging a career in coaching and joined West Coast as a development coach in 2014 after holding a similar position for two seasons at St Kilda. He was appointed head coach of East Perth, West Coast's affiliate side in the WAFL, ahead of the 2016 season, a role he held for just one year before rejoining Adam Simpson's coaching panel as the forward line coach.

Retrieved from "https://eaglepedia.fandom.com/wiki/Jaymie_Graham?oldid=25464"
Community content is available under CC-BY-SA unless otherwise noted.