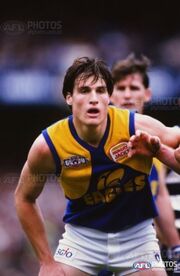 Picked up from Swan Districts during the early 1990s, the giant Ball was equally capable of playing in the ruck or as a key forward during his time at West Coast.

In just his 18th game of senior football, Ball started at centre-half forward in the 1994 grand final and kicked two goals.

Ball spent most of 1995 in the forward line with Peter Sumich out injured, and ended the season as the club’s leading goalscorer with 48 majors. The following year he snared a career-best 6 goal haul against North Melbourne at Subiaco.

He played in his final match in blue and gold in the qualifying win over the Bulldogs in 1999. At the end of the season he was wooed by Sydney and was traded to the harbour city for a pair of draft picks. (West Coast did alright out of the trade – one of those picks was used on future skipper and premiership fullback Darren Glass).

Ball played 90 games in the red and white including a number of battles with his old side and their champion ruckman Dean Cox. He retired after the last such battle, the 2005 grand final, having won his second premiership medal.

Ball remained in Sydney after retiring, working as a stockbroker and sitting as a director on the Swans' board. He joined the AFL Commission in 2015.

Retrieved from "https://eaglepedia.fandom.com/wiki/Jason_Ball?oldid=33347"
Community content is available under CC-BY-SA unless otherwise noted.