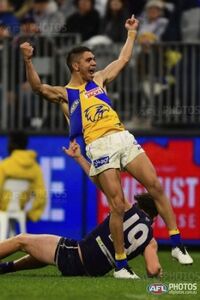 The younger brother of Adelaide and Brisbane forward Charlie Cameron, Jarrod was selected by West Coast as a Next Generation Academy selection ahead of the 2018 draft.

Having played rugby and baseball growing up in Queensland, Cameron switched to Australian Rules when the family moved to Newman.[1] His indigenous background and Pilbara address qualified him for the Eagles' academy, and he appeared for the WA under-18s and Swan Districts' colts side (also making several reserves and one league appearance) in 2018 before being nominated as an academy selection. He became the first Next Generation Academy player to join the Eagles' senior list, after the club matched a bid on him by his brother's club late in the second round.

Cameron had a taste of AFL football in the JLT pre-season series before an ankle injury interrupted his progress. He showed promise in the WAFL, in particular a four-goal effort against his old side Swan Districts, and was called up for a debut midway through the season. Immediately impressing with his goal sense and a tackling ability that belied his light frame, Cameron kicked back-to-back hauls of four goals against Fremantle and Collingwood, but after several quiet games in a row was sent back to the reserves to continue his development.

He was hampered by the dreaded osteitis pubis throughout 2020, appearing just a shadow of his 2019 self in his five senior games during the season.

Retrieved from "https://eaglepedia.fandom.com/wiki/Jarrod_Cameron?oldid=34141"
Community content is available under CC-BY-SA unless otherwise noted.