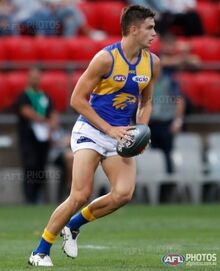 Originally part of the GWS Giants academy, having grown up in Wentworth in the Riverina area of New South Wales,[1] Brander was considered a potential top-five pick early in 2017 but dropped after an average season. On being drafted, Brander was described as agile, strong overhead and capable of holding down a key position at either end of the ground.

Given the number 10 guernsey, Brander impressed early with East Perth as a strong-marking forward and was rewarded with a two-year contract extension. He was picked to debut against Sydney in the absence of Jack Darling, but after a quiet game was dropped back to the Royals as the match committee looked for more experience in the forward line. He shifted to defence later in the season and generally acquitted himself well, but was unable to force his way back into the AFL side.

After a strong pre-season, Brander was in the senior side for the opening round of 2019, but was dropped after a poor loss to Brisbane. He made one more appearance at AFL level for the year, another heavy away loss, and spent the rest of the season playing as a tall wingman at WAFL level before suffering a torn hamstring. The experiment of using Brander on a wing continued into 2020, with the mobile tall playing the first four games, with moderate success. He was forced out with a hip injury and then did not return to the senior side until later in the year, adding four more games.

Retrieved from "https://eaglepedia.fandom.com/wiki/Jarrod_Brander?oldid=34372"
Community content is available under CC-BY-SA unless otherwise noted.