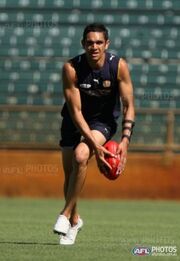 A top-10 draft pick for Richmond, Jarrad Oakley-Nicholls disappointed in his time at Tigerland before spending two years on West Coast's rookie list.

After playing juniors with East Perth, Oakley-Nicholls was drafted by Richmond with pick 8 in the 2005 draft.

A quick rangy wingman or flanker, constant injuries hampered his development at Richmond. He played just 13 games in four years before being delisted at the end of 2009.

West Coast, who had apparently been interested in Oakley-Nicholls as a junior, gave him a lifeline in the 2010 rookie draft. He spent two years on the rookie list, playing for East Perth but never really in the mix for senior selection. He was delisted at the end of 2011.

Oakley-Nicholls played on with East Perth, tallying over 100 games with the Royals before retiring midway through the 2017 season and joining amateur club North Beach.[1] He switched to Nollamara for the following season, lining up alongside a number of other former AFL players including David Wirrpanda.[2]

Retrieved from "https://eaglepedia.fandom.com/wiki/Jarrad_Oakley-Nicholls?oldid=25674"
Community content is available under CC-BY-SA unless otherwise noted.