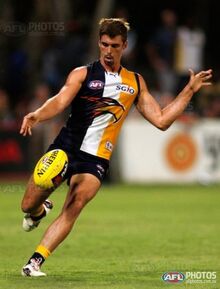 Originally from Northampton, Jamie Cripps played two seasons at St Kilda before requesting a trade back to WA, where he has developed into a defensive-minded small forward.

Cripps played senior football for East Fremantle at 17 before being taken by St Kilda with their first pick (24th overall) in the 2010 national draft. He played 16 games in two seasons at the Saints before asking to be traded to West Coast, citing homesickness.

St Kilda were reluctant to release him but eventually agreed to accept a pick in the 40s and a slight swap of picks.

Cripps was selected in the opening-round derby, kicking two goals from a half-forward flank. He went on to play 15 games for the 2013 season, generally as a defensive forward with stints on the ball, and occasionally starting as the substitute. When not selected for West Coast he played for East Perth under the new alignment arrangement.

In his second season at West Coast the former Saint cemented himself in the side as a small forward, apart from a midseason drop in form that saw him spend a few weeks at East Perth. Cripps kicked 27 goals for the year, good for fourth at the club, and showed an ability to impact the scoreboard even when having a quiet game.

Despite his form tailing off late in 2015, Cripps had a career-best year as a defensive small forward. Playing every game, his 34 goals was good for fourth at the club and he recorded more tackles than anyone bar Matt Priddis. He again played every game in 2016, but was one of many Eagles who failed to reach the heights of the previous season, although his 28 goals was again good enough for fourth on the team.

Cripps recorded his 100th AFL game early in 2017 but suffered an ankle injury several weeks later, and although he was able to return earlier than expected he failed to recapture his best form for the rest of the season.

After signing a contract extension early in 2018, Cripps turned in a career-best year, playing every game, finishing fourth in the best and fairest and regularly kicking bags of goals. His 38 goals for the season was behind only spearheads Jack Darling and Josh Kennedy and he kicked a crucial goal during the third term of the Grand Final.

Despite missing the following pre-season and the first two rounds due to a foot issue and suffering a mid-season groin injury, Cripps had a solid 2019, finishing equal third at the club with 30 goals. He struggled for form during 2020, and left the team's Queensland hub late in the 2020 season for the birth of his first child, returning for the elimination final.

Cripps' cousin Patrick, also from Northampton, was selected by Carlton in the 2013 national draft (two picks after Dom Sheed) and went on to become the Blues' co-captain and a multiple best and fairest winner.

Retrieved from "https://eaglepedia.fandom.com/wiki/Jamie_Cripps?oldid=34135"
Community content is available under CC-BY-SA unless otherwise noted.