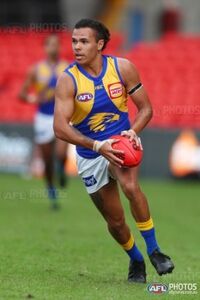 Jones was raised in a group home in Mildura in country Victoria before being adopted and moving to Geelong, and later Heywood in western Victoria. He played TAC Cup for North Ballarat and was picked up by Geelong late in the 2017 rookie draft. Jones played seven games for the Cats over three years, but was delisted at the end of 2019.

With premiership forwards Rioli (suspension) and Venables (concussion) set to miss the 2020 season, Jones was signed as a rookie during the supplementary selection period, along with Nick Reid. Despite an interrupted pre-season, he was able to push his way into the senior side while the team was in the Queensland "hub", playing two games before suffering a hamstring injury. After several setbacks, he ultimately required surgery on the hamstring, ruling him out for the rest of the year.

11/8/20: Jones ruled out for season after hamstring setback

Retrieved from "https://eaglepedia.fandom.com/wiki/Jamaine_Jones?oldid=34389"
Community content is available under CC-BY-SA unless otherwise noted.