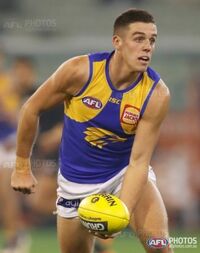 The son of dual premiership player Chris and the younger brother of Alec, Jake Waterman joined West Coast as a father-son selection in 2016.

A highly-rated junior, Jake captained WA's under-18 side before winning the Mel Whinnen Medal as best-afield in Claremont's colts premiership. A medium-sized forward with the potential to push into the midfield, he accepted West Coast's nomination ahead of the 2016 draft despite the recent delisting of his brother Alec, who had been struck down by glandular fever in his two seasons on the playing list. He became an Eagle with the last active pick in the draft after no other club made a bid for him.

Waterman made an early appearance in the pre-season JLT Series before suffering a stress fracture in the foot that kept him out for most of 2017. After some setbacks, he returned late in the season and put in some strong performances in East Perth's forward line, coming close to a senior debut when he was named as an emergency for the final home-and-away game.

Earning a Round 1 debut in 2018 in place of the injured Josh Kennedy, Waterman impressed as a hard-running forward. He played 16 of the side's first 18 games and received a Rising Star nomination, before being squeezed out of the lineup as the match committee looked to field a smaller forward line. He started the 2019 season in the senior side but was quickly dropped to the WAFL, where he kicked 13 goals in his first three games to push his way back into the team. Waterman had another stint in the reserves mid-season before being recalled for the last six games of the home-and-away season and the finals, finishing as the reserves' leading scorer with 28 goals in just eight games.

Left out of the side at the start of 2020, Waterman eventually forced his way into the lineup and kicked six goals in his first four games. He missed several games late in the year with a broken hand but returned for the finals push, and was used in a variety of positions. Waterman was rewarded with a three-year contract extension at the end of the season.

Retrieved from "https://eaglepedia.fandom.com/wiki/Jake_Waterman?oldid=34359"
Community content is available under CC-BY-SA unless otherwise noted.