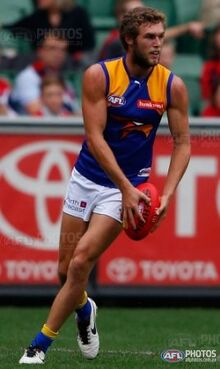 A late starter, Brennan impressed West Coast recruiters after playing his first season of WAFL seniors with East Fremantle as a 20-year-old in 2010 and was nominated by the club as a father-son selection.

After another solid season with the Sharks in 2011, Brennan began pushing for senior selection early in the 2012 season and got his chance in round 6 against the Roos. He was a fixture in the backline from that point on, his speed an asset in an otherwise one-paced defensive unit. Brennan played 16 games for the season including the finals against North and Collingwood, and won the Rookie of the Year award at the end of the season.

Given his father's number 14 guernsey for 2013 after Koby Stevens was traded, Brennan tailed off a little in form in his second season. He played 8 of the club's first 11 games, but limited output and a calf injury kept him to just 2 more AFL games for the year.

Brennan found himself out of favour under new coach Adam Simpson in 2014, spending the vast majority of the season at new WAFL club East Perth. Although he was an emergency plenty of times, his only two senior games came late in the season and he was delisted at the end of the year.

Brennan returned to East Fremantle for the 2015 season, although injury prevented him from taking the field. He worked as a line coach for the Sharks in 2016 and 2017 before taking over as coach of the club's colts side in 2018.[1]

Retrieved from "https://eaglepedia.fandom.com/wiki/Jacob_Brennan?oldid=28782"
Community content is available under CC-BY-SA unless otherwise noted.