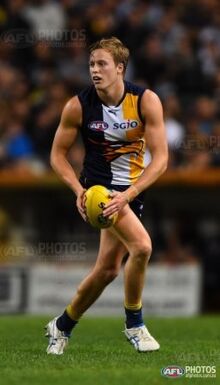 After spending much of his formative years in Sydney, Nelson's family moved to Geelong where he played for the Falcons TAC Cup side and was given the opportunity to train for a week with the Cats.

On being drafted, Nelson was described as having excellent game sense and speed, and as a good ball user by hand and foot. A defender with the potential to progress into the midfield, Nelson performed well beyond expectations in his rookie season, making his debut in the opening round after a strong NAB Challenge campaign. The blonde Nelson played nine of the first ten games before dropping back to East Perth, adding another two games late in the year.

Nelson added just eight games in 2016 and frequently found himself stuck between levels, often held over as an emergency for the senior side and ending up missing action entirely. He moved from defence into the midfield mid-season and looked promising, but played in the backline in two late-season AFL appearances.

After returning to defence Nelson showed some good form early in 2017 but was hampered by wrist and hamstring injuries, losing his spot shortly before the finals after adding 13 games to his senior tally. 2018 was similarly frustrating, with Nelson playing 10 of the first 13 games, generally as a lock-down defender, but finding himself out of the senior side in the second half of the year as Tom Cole and Liam Duggan cemented spots in the backline.

Nelson spent most of the first half of 2019 in the reserves, but forced his way into the side (at the expense of Cole) and held his spot as a shutdown small defender, playing his 50th game and participating in finals football for the first time in his career. He was dropped early in 2020 but rebounded to become a backline regular and one of the season's big improvers alongside Duggan and Cole.

Retrieved from "https://eaglepedia.fandom.com/wiki/Jackson_Nelson?oldid=34367"
Community content is available under CC-BY-SA unless otherwise noted.