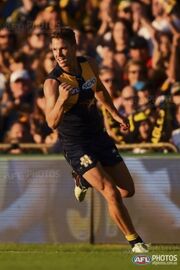 Originally from Keith in South Australia's south-east, Redden attended Sacred Heart College in Adelaide and represented Glenelg. He was drafted by Brisbane in the second round of the 2008 draft and played 129 games for the Lions, including 112 consecutive games from his debut. Known as a contested ball winner and strong tackler, Redden finished third in the Lions' best and fairest in 2011 and equalled that result in 2013.

Despite being contracted to Brisbane for the 2016 season and having no links to WA, Redden requested a trade to West Coast at the conclusion of the 2015 season. The deal was done on the first day of the trade period, with the Eagles giving up their first-round selection in exchange for Redden.

The former Lion missed most of the pre-season after groin surgery and struggled to catch up throughout the year. After playing every game in the first half of the season, he found himself at East Perth after the bye and, although he returned for two more games, was dropped again after that, this time for good.

Redden continued to struggle to fit into the Eagles' midfield early in 2017 and was dropped back to East Perth mid-season, but found form late in the year and was one of the side's best during the finals. He continued that form through 2018, becoming a prime mover in the middle following the retirements of Matt Priddis and Sam Mitchell. Redden played every game, leading the side in total disposals, and was at his best during the club's victorious finals campaign, being named the Player of the Finals (tied with Dom Sheed) and finishing runner-up in the John Worsfold Medal.

Although he was a regular in the midfield in 2019 and again finished in the top ten of the best and fairest, Redden had a quieter year, taking a lesser role behind Elliot Yeo, Luke Shuey and the emerging Dom Sheed. That continued in 2020 with the addition of Tim Kelly, with Redden pushed out to a wing on occasion, while also missing numerous games with a groin injury and a fractured thumb.

Retrieved from "https://eaglepedia.fandom.com/wiki/Jack_Redden?oldid=34133"
Community content is available under CC-BY-SA unless otherwise noted.