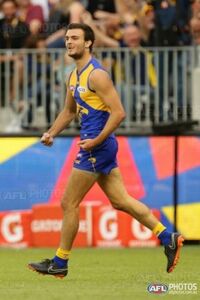 A former basketballer,[1] Petruccelle represented Vic Metro in the national Under-18 competition before setting the fastest 20-metre sprint time at the draft combine, recording just 2.87 seconds. On being drafted, Petruccelle was described as a versatile player with elite speed and vertical leap.

After a four-goal haul for East Perth, Petruccelle was called up to make his debut in the first Derby to be played at Perth Stadium. Playing as a defensive forward, he had a quiet game but kicked two goals against Port Adelaide the following week to showcase his potential, before being forced out of the side with an ankle injury. He made one further senior appearance later in the year, but his WAFL form dropped away at the tail end of the season.

After a strong pre-season and the offseason retirement of Mark LeCras, Petruccelle was tapped for a spot in the forward line in round 1 and held his spot for most of the year, earning a Rising Star nomination with a five-goal haul in a heavy loss to Port Adelaide. Dropped for the first final, the speedster was recalled the following week in place of a suspended Willie Rioli, kicking one goal as the Eagles' flag defence ended at the hands of Geelong. Petruccelle struggled during the pandemic-affected 2020 season, losing his spot early in the year and then suffering a serious hamstring injury. He returned in time for the finals but had limited effectiveness.

Retrieved from "https://eaglepedia.fandom.com/wiki/Jack_Petruccelle?oldid=34069"
Community content is available under CC-BY-SA unless otherwise noted.