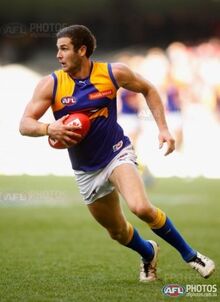 Exciting mobile forward Jack Darling has become an important member of the side in a short period of time, missing just three games in his first four seasons.

Jack Darling was talked about as a top-5 pick before a couple of minor off-field incidents and perceived issues about his ability to transition to the elite level resulted in him slipping into the 20s, where West Coast gleefully grabbed him with a priority pick received after their wooden-spoon 2010 season.

Darling immediately set about putting those doubts to rest, earning a place in the senior side for round 1 after a strong pre-season campaign. He kicked 2 goals on debut and impressed with his willingness to chase and tackle inside forward 50. Darling played 23 games in his rookie season (including all three finals) and finished fifth in the Rising Star voting.

Injury to Josh Kennedy early in 2012 meant that more responsibility was thrust on the young Darling. Installed as the full-forward target, Darling responded admirably, playing every game for the year and kicking 53 goals to lead the club's goalscoring. Darling kicked a season-high 5 goals against Brisbane and became the youngest player to ever win West Coast's goalkicking award.

With Kennedy's return to full fitness in 2013 Darling went back to being a secondary target. Despite that, he still kicked 42 goals for the year including a few more bags of five. In 2014, Darling spent more time in the midfield than usual and it was reflected in his stats – he totalled career highs in possessions and clearances but kicked less goals than he managed in 2012 and 2013 (although his 39 goals was still second on the team behind Kennedy).

His start to 2015 was delayed by a foot injury, the first major injury setback of Darling's career, but he quickly found form after returning mid-year. Perhaps due to his lack of a pre-season fitness campaign, Darling had a disappointing end to the year including a horror Grand Final performance.

Darling played every game in 2016 and kicked 44 goals, his best return since 2012 and proving an effective foil for Kennedy as he won the Coleman Medal. However, he again let himself down with a couple of costly mistakes in the elimination final. He continued to combine well with Kennedy in 2017, with the pair kicking more goals than any other duo in the league. Darling's form took a turn mid-season when Kennedy missed games through injury and following complications in the birth of his first child, but he rebounded to tally 43 goals for the year and earned Eagles' life membership during the finals.

Darling was the form player of the competition in the first half of 2018, and was second in the Coleman Medal race after kicking a career-high six goals against reigning premiers Richmond in round 9. However, an ankle injury interrupted his progress and kept him out of the side for a month, and he could not quite recapture the same form on his return. Going into the Grand Final he was the subject of headlines about his poor performance in 2015, which seemed to be repeating in the first half of the match before he turned in a sensational third quarter which helped to turn the tide of the match towards the Eagles. Darling finished the season with a second leading goalscorer gong and a premiership medal.

He continued to grow into his role as the main target in the Eagles' forward line in 2019, kicking a career-high 59 goals to lead the team's scoring for the third time, and was named an All-Australian for the first time. Darling failed to reach the same heights in the pandemic-affected 2020 season, kicking 30 goals from 18 games.

13/3/15: Delayed start for Darling after setback

Retrieved from "https://eaglepedia.fandom.com/wiki/Jack_Darling?oldid=35316"
Community content is available under CC-BY-SA unless otherwise noted.