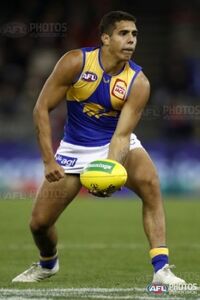 Winder came to prominence with a series of eye-catching displays for Peel's colts team, also playing a handful of senior games for the Thunder during the 2020 season. On being drafted, he was described as an eye-catching midfielder with the versatility to play in multiple positions.[1]

Retrieved from "https://eaglepedia.fandom.com/wiki/Isiah_Winder?oldid=35229"
Community content is available under CC-BY-SA unless otherwise noted.