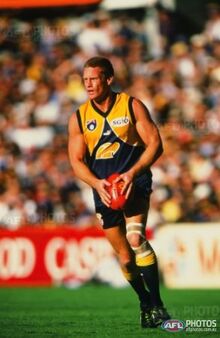 One of the most highly decorated players in West Coast history, “Bluey” McKenna was a stalwart in defence for the first half of the club’s existence, forming a powerful halfback line with John Worsfold and Glen Jakovich. With his silky skills, great game-reading ability, strong defensive qualities and calm manner, McKenna was a perfect quarterback before the term was even used in the AFL, setting up attacks from the back half with good precision.

Hailing from Carine, as a junior McKenna was one of the “Magnificent Seven” that led WA to its 1985 Teal Cup win, along with Worsfold, Chris Lewis, Chris Waterman and Peter Sumich. He then played in a WAFL premiership with Claremont in 1987 before joining the Eagles prior to the 1988 season.

A skilled and dependable defender, Bluey made his debut in the opening round of 1988 and immediately showed he belonged in the big league, finishing runner-up in the Club Champion award despite playing just 18 of a possible 23 games. Unsurprisingly McKenna was also named the club’s Rookie of the Year.

The following year he went one better, winning the Best and Fairest in a canter and being named in the VFL Team of the Year (the precursor to the All-Australian team). He also picked up 13 Brownlow votes to finish in the top 10.

McKenna played every game in 1990 and finished equal 5th in the Club Champion count. Highlights of 1990 included being best-afield in a win over the strong Hawthorn side in his 50th game, and kicking 2 goals in a late-season win over Richmond (having previously kicked only 3 goals in his career to that point).

In 1991 he again played every game, was named in a back pocket in the All-Australian side and finished just one vote behind eventual Club Champion Craig Turley. McKenna was also one of West Coast’s best players in its first ever Grand Final appearance, a crushing defeat to Hawthorn.

The usually durable McKenna missed large chunks of the 1992 season, playing just 9 games during the home and away rounds. He returned late in the year, however, and was able to get a solid run into the finals and take his place in the side’s historic Premiership win.

1993 was a return to the McKenna of old, with the reliable defender coming third in the Club Champion award (behind co-winners Jakovich and Don Pyke) and being selected on a halfback flank in the All-Australian team.

In 1994 he got a third All-Australian jumper, again picked on the halfback line, and another top-three finish in the Best and Fairest. A popular member of the side with a reputation for being a bit of a practical joker, McKenna was also awarded the Best Clubman gong in 1994. He also, of course, got a second premiership medal:

It was more of the same for much of the 1990s, with McKenna consistently finishing in the top 10 in the B&F (4th in 1995, 3rd in 1996, 7th in 1997 and 6th in 1998) and continuing to provide a cool, reliable presence in the back half of the ground. He took over as Woosha’s deputy in 1996 after the retirement of Michael Brennan and in 1997 was the first Eagle to play 200 games (unfortunately the side marked the achievement by losing to Richmond).

He took over as club captain in 1999 (well, actually in the 1998 final series after Mick Malthouse controversially dropped Worsfold) and relished the added responsibility, winning the Club Champion award for the second time, a decade after his first win.

In 2000 McKenna was debilitated by a back injury and could manage only 9 games. At the end of a disappointing season, with the club shifting into a rebuilding phase under Ken Judge, the popular McKenna announced his retirement. In a tremendous moment, the regular defender drifted forward late in the final game of 2000, and kicked a goal with his last-ever kick in the AFL.

Bluey retired after a then-club record 267 games. He also holds the remarkable record of finishing in the top 10 of the Club Champion award 11 times in 13 seasons, only missing out in the injury-hit 1992 and 2000 campaigns.

In retirement he has been honoured with induction into the Australian Football Hall of Fame as well as being an inaugural inductee into the West Coast Hall of Fame. McKenna has stayed involved in football, spending a season as head coach at Claremont before going on to be an assistant at Collingwood under Malthouse. He was chosen by Gold Coast to be the club’s first senior coach, and remained in that role until being surprisingly sacked at the end of the 2014 season.

McKenna reconnected with Worsfold in 2016, joining his former skipper as an assistant coach at Essendon. He remained in that role for two seasons before leaving at the end of 2017. He was appointed coach of Victorian amateur club Beaumaris for the 2018 season.

Retrieved from "https://eaglepedia.fandom.com/wiki/Guy_McKenna?oldid=33339"
Community content is available under CC-BY-SA unless otherwise noted.