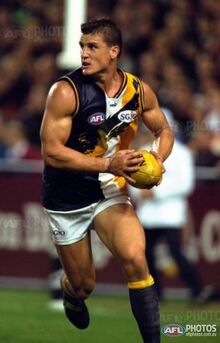 Perhaps the greatest centre-half-back of the modern era, Glen Jakovich was the games record holder at West Coast until being overtaken by Dean Cox, and a regular feature in discussions about the club’s best-ever player.

The powerfully-built defender of Croatian heritage was picked up as a zone selection in the 1990 national draft (along with Mitchell White) and made his debut halfway through the 1991 season, just a few months after his 18th birthday. Used at either end of the ground and in the ruck during his rookie season, Jakovich held his place for the rest of the year and played in the ill-fated grand final at Waverley alongside fellow 18-year-old and future long-term partner in defence Ashley McIntosh.

In 1992 Jakovich, still in his teens, settled into the back half and the number 27 guernsey, playing 24 games for the year and finishing third in the club champion award. He was an integral part of the rebound from defence that saw the side win its historic first premiership.

The following year, while West Coast was unable to repeat its premiership-winning form, Jakovich continued to grow as a player. The hulking centre-half-back tied with midfielder Don Pyke for the best and fairest, the first of four times he would pick up the award in his career.

Jako won a second Club Champion award the following year, as well as a second premiership medal and a maiden appearance in the All-Australian side. He made it a three-peat of Club Champion awards in 1995 and was again named at centre-half-back in the All-Australian team. During this time he had an engaging rivalry with North Melbourne champion Wayne Carey, with the personal battles between the Roos’ spearhead and the Eagles’ defensive rock often worth the price of admission alone. Jakovich was able to claim the personal honours more often than not, typified by his best-on-ground effort against Carey early in the 1995 season.

Tragically Jakovich wrecked his knee midway through 1996, and was never quite the same player after that. He returned about a month in to the 1997 season and took some time to regain his form.

It was probably 1999 by the time Jakovich was back to something approaching his best. In Mick Malthouse’s last season in charge, Jako finished top 10 in the best and fairest for the first time since his three wins in a row, just a handful of votes below winner Guy McKenna. He won a fourth award the following year, bringing up his 200th club appearance in an away loss to Sydney mid-year.

When Guy McKenna retired at the end of 2000 Jakovich made no secret of his desire to take on the captaincy. The club instead opted for a pairing of fellow veteran Dean Kemp and talented youngster Ben Cousins, but the professional Jakovich didn’t let it prevent him from performing a leading role on the field. He also proved extremely durable, missing just two games between 2001 and 2003 and passed McKenna’s games record late in the 2003 season.

Early in 2004 Jakovich, now aged 31, somewhat surprisingly pulled the pin, announcing his decision shortly before his final game against Sydney. Ever the showman, Jako kicked 3 goals in the win over the Swans and bowed out to a huge ovation.

Jakovich went into the media after his footy career ended, providing special comments on Fox Footy and 6PR radio. He has also acted as an assistant coach at his original club, South Fremantle. His on-field performance was recognised when he was inducted into the AFL Hall of Fame in 2008, and was an inaugural inductee into the West Coast Hall of Fame.

Retrieved from "https://eaglepedia.fandom.com/wiki/Glen_Jakovich?oldid=28597"
Community content is available under CC-BY-SA unless otherwise noted.