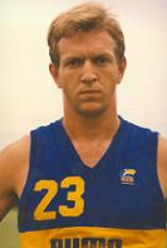 One of the lesser-known inaugural Eagles, Glen Bartlett was a big key-position player from East Perth who managed 4 games in the gold and blue in 1987.

Capable of holding down centre-half-forward or centre-half-back, Bartlett’s effect on games at VFL level was unfortunately minimal and he was delisted at the end of the year. He did, however, get presented the Best Clubman award for his work at the club in that first season.

Bartlett continued his career at the Royals, winning the Bernie Naylor Medal for leading the WAFL’s goal tally in 1991. He was drafted to Brisbane at one stage but elected to stay in WA and never appeared for the Bears.

Bartlett moved into the legal field after his football career ended and is currently the president of the Melbourne Football Club, combining the role with his career as a prominent industrial relations lawyer.

Retrieved from "https://eaglepedia.fandom.com/wiki/Glen_Bartlett?oldid=22700"
Community content is available under CC-BY-SA unless otherwise noted.