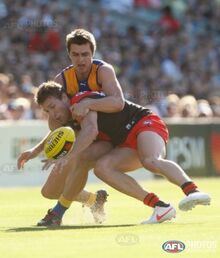 One of the more highly-rated key forward prospects in the 2011 draft pool, McInnes, the nephew of former Eagles Michael Brennan and Rob Wiley and the cousin of one-time teammate Jacob Brennan, was taken by West Coast with their second pick.

He had a quiet 2012 season at Perth, although he looked a chance of a senior debut mid-season when he was taken to Adelaide as an emergency with Jack Darling under an injury cloud.

He pressed harder for a debut in 2013, putting in some strong performances with the Demons. Named as an emergency several times, he was once again brought on an interstate trip but still couldn't crack a debut.

McInnes shifted to East Perth in 2014 under the host club arrangement. His form with the Royals was up and down and not enough to earn him that elusive debut, but he was given at least one more season on the list to come good.

He finally made his debut in his fourth season on the club's list, showing great promise as a lead-up forward early in the season before dropping back to the WAFL when Darling returned from injury. He remained in the mix for senior selection until he tore his hamstring which brought an early end to his season.

Demoted to the rookie list in 2017, McInnes was used primarily as a pinch hitting ruckman at East Perth but managed to add just two senior games despite the Eagles' ruck shortage, finding himself well down the pecking order. He added another three games in 2018, filling in for a suspended Nic Naitanui for one week and making a couple of unsuccessful appearances as a key forward later in the year when injuries ruled out both Darling and Josh Kennedy, before late-season groin issues cruelled whatever chance he had of participating in the AFL finals.

Retained for one last year on the rookie list, the popular McInnes was installed as inaugural captain of the Eagles' standalone WAFL reserves, leading the side to a semi-final berth in its first season.

Retrieved from "https://eaglepedia.fandom.com/wiki/Fraser_McInnes?oldid=31461"
Community content is available under CC-BY-SA unless otherwise noted.