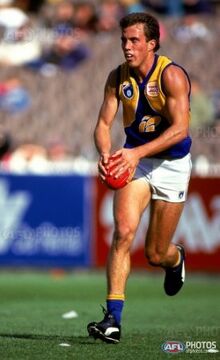 Fraser Gehrig was well-known for his strength – in his time at West Coast he set a new bench-press record. In addition to that trait, his height, athleticism and versatility made him an integral part of the team during the mid to late 90s as he played anywhere from full-forward to full-back to wing. In the latter half of his career his fearsome strength made him a formidable full forward for St Kilda.

Originally from Wodonga on the Murray River, Gehrig arrived at the club as a first-round selection in 1993.

Gehrig spent 1994 developing in the WAFL with Perth before bursting onto the AFL scene in 1995, playing 16 games for 21 goals including a 5-goal haul against the Demons, and picking up the club’s Rookie of the Year award.

A solid 1996 spent mostly down back was followed by a massive 1997 when he kicked 31 goals, second only to Peter Sumich, and won selection in a forward pocket in the All-Australian side.

His 1998 may have been even better. Now almost a permanent forward, he kicked 42 goals to win the club goalscoring including half a dozen against Sydney and a couple of hauls of 5.

Despite his impressive performances he was something of a lightning-rod for criticism from Eagles fans during his time at the club. At the end of the 2000 season he asked to be traded back to Victoria and was sent to the Saints in return for David Sierakowski and the draft pick that was used on Daniel Kerr.

At the Saints Gehrig transformed from an athletic utility to a gorilla full-forward, winning the Coleman Medal twice and picking up another All-Australian jumper in 2004. Gehrig’s career at the St Kilda also included 145 games, consecutive club goalkicking awards from 2003 to 2007 and the world’s shortest retirement (he retired at the end of the 2007 before changing his mind, going back into the draft and being redrafted by the Saints), before giving the game away for good at the end of 2008.

Retrieved from "https://eaglepedia.fandom.com/wiki/Fraser_Gehrig?oldid=28647"
Community content is available under CC-BY-SA unless otherwise noted.