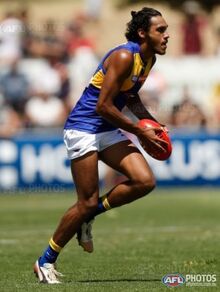 Kimberley product Francis Watson was added to West Coast's list as a Next Generation Academy selection after a couple of standout seasons for Claremont.

Originally from the remote Balgo community 250 kilometres from Halls Creek,[1] Watson went undrafted after representing WA in the under-18 competition in 2014. He played senior football for Claremont in 2015 but suffered a broken leg that affected his draft prospects.[2]

When the indigenous academies were introduced in 2016 Fremantle sought exclusive access to Watson but were knocked back,[3] making him available to all teams and the Eagles pounced, signing him as a List B rookie.

Watson caught the eye in the 2017 pre-season with some promising performances during the JLT series, and looked a chance at promotion from the rookie list before suffering an ankle injury that halted his momentum. He couldn't regain his previous form but remained a solid contributor in East Perth's backline.

Shifted from "List B" to the standard rookie list over the offseason to ensure he was available for AFL selection, Watson failed to force his way into a settled backline in 2018, although he was close on a number of occasions. Watson finally made his debut late in the 2019 season, in Alice Springs as a late replacement for skipper Shannon Hurn, and played the following week before returning to the new Eagles reserves side.

Watson was unable to add to his senior tally in 2020, failing to push his way into a settled backline before suffering a knee injury at training that ruled him out for the rest of the year. He was delisted at the end of the season.

Watson returned to Claremont for the 2021 season, along with Anthony Treacy.[4]

Retrieved from "https://eaglepedia.fandom.com/wiki/Francis_Watson?oldid=34179"
Community content is available under CC-BY-SA unless otherwise noted.