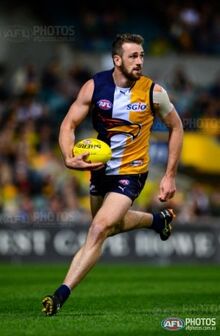 One of the league's most dependable defenders at his peak, Eric MacKenzie won the John Worsfold Medal in 2014 before injury wrecked his final few seasons.

Claremont defender MacKenzie was touted as a possible first-round pick in 2006 but slipped into the late 20s, where the reigning premiers picked him up alongside fellow key defenders Mitch Brown and Will Schofield. He spent the 2007 season learning his trade with the Tigers, playing just a solitary AFL game against Port Adelaide in the midst of an injury crisis.

MacKenzie's second AFL game didn't come until late in 2008, when he was called up to replace an injured Adam Hunter. He managed to hold his spot for the remainder of the year, finishing with seven games, and built on that momentum in 2009 when he began to establish himself as a regular, playing 16 of 22.

After beginning the 2010 season in the senior side, "Ezy" lost his spot early in the season to Schofield but after a few weeks with Claremont managed to oust Matt Spangher, as the Eagles' young key defensive prospects jostled for positions. That pattern continued in 2011, with MacKenzie starting the season behind Brown and Schofield in the pecking order before breaking into the side in round 3. A foot injury interrupted his season, but he returned for the second half of the year including the run to the preliminary final.

MacKenzie became a full-time member of the senior side in 2012, typically taking on the opposition’s number 1 forward during the season as Darren Glass shifted to a loose man role. He had mixed results, but his shutdown job on Buddy Franklin early in the season was a gem. Ezy had a special moment in the elimination final against North when he drifted forward and kicked the first goal of his 78-game career, and followed it up a week later by holding Collingwood's Travis Cloke goalless. He was rewarded with his first top-10 finish in the club best and fairest.

He really came of age in 2013, developing into an elite-level stopper and putting in some fantastic performances on some of the competition’s biggest names. The best of those came against St Kilda when he not only blanketed but actually outscored Saints captain Nick Riewoldt, and kicked the game-winning goal in the process. MacKenzie's fantastic year was recognised when he was named in the extended 40-man All-Australia squad, and as runner up to Matt Priddis in the John Worsfold Medal.

He went one better in 2014, continuing to take on and beat the opposition’s best power forward week after week with a minimum of fuss, while also becoming a useful tool on the counterattack. MacKenzie reversed the previous year's result to win the Worsfold Medal for the first time and was named in the AA squad for the second year running, although he was controversially omitted from the final side.

Having been one of several acting captains during 2014 following Glass' retirement, MacKenzie looked set to lead the defence in 2015 before disaster struck in the first NAB Challenge game when he ruptured his anterior cruciate ligament in an innocuous looking incident, ruling him out of the whole season.

On returning in 2016, MacKenzie battled to find form and fit into the new defensive structure. He lost his spot mid-season to youngster Tom Barrass and spent most of the second half of the year with East Perth, playing just two more senior games. After starting 2017 in the senior side he was quickly overtaken again by Barrass, but found his way back mid-season and began to recapture some of his best stopping form to hint he still had an AFL future.

Unfortunately, surgery on a rare condition affecting the toes over the off-season was followed by stress fractures in his feet that delayed his start to 2018. He played one midseason game for East Perth but suffered a flare-up,[1] and ultimately was forced to announce his retirement at the end of 2018 when the injury refused to improve.

MacKenzie remained with West Coast as a game development officer, working across the women’s, next generation and multicultural academies in coaching and sports science roles as well as with the standalone WAFL reserves side.[2]

Retrieved from "https://eaglepedia.fandom.com/wiki/Eric_MacKenzie?oldid=31543"
Community content is available under CC-BY-SA unless otherwise noted.