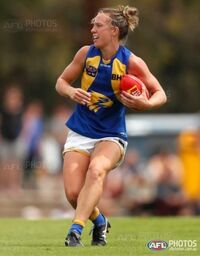 Marquee midfielder Emma Swanson was signed from GWS ahead of the Eagles' entry into the AFLW competition.

Originally from Mandurah, Swanson won four best and fairest awards with East Fremantle's WAWFL side before being signed by the Giants as one of the club's two marquee players and appointed the Giants' vice-captain. Swanson was named in the All-Australian team in 2017, but missed the majority of the 2019 season with a shoulder injury.[1]

Swanson was signed by West Coast in April 2019 during the AFLW's exchange period, and was named as the club's inaugural AFLW captain ahead of the 2020 season.

Retrieved from "https://eaglepedia.fandom.com/wiki/Emma_Swanson?oldid=32396"
Community content is available under CC-BY-SA unless otherwise noted.