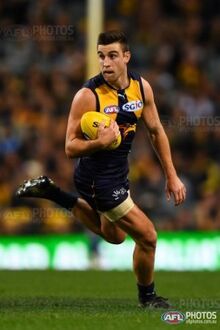 Originally from Booragoon in Perth's southern suburbs, Yeo was a second-round pick for Brisbane in the 2011 national draft after playing state under-18s and for East Fremantle's colts side.

He broke into the Lions' senior side midway through his first season and played 27 games in two seasons. Like a number of his young Brisbane teammates, he requested a trade back to his home State at the end of 2013.

West Coast sent its second rounder to Brisbane in return for Yeo (having acquired a slightly later second-rounder from Collingwood). He was given the number 6 jumper vacated by Mark Nicoski. The ex-Lion showed great promise in his first year in gold and blue before breaking a hand mid-season. Used in defence initially, Yeo was shifted into the middle and impressed as a big-bodied midfielder, never more so than in Launceston against the Hawks when he recorded 23 possessions and 7 clearances.

Yeo was thrown all over the ground in 2015, often being asked to pinch-hit against bigger opponents in the backline, particularly early in the year. He was at his most dangerous when used as an explosive midfielder, particularly against Gold Coast when he recorded career highs in disposals (29) and goals (4).

Used in the midfield and as a strong-marking forward in 2016, his form was patchy for much of the year, particularly away from home and towards the tail-end of the season. Yeo kicked 16 goals for the year but only one from his last six games.

He had a breakout year in 2017, winning the John Worsfold Medal and being named All-Australian for the first time. Generally used to best effect as a rebounding defender, Yeo also had stints in the midfield, particularly during the second half of the season. Used as a permanent midfielder during 2018, Yeo had another sensational campaign and was again named in the extended All-Australian squad. Although he was unlucky to miss out on selection in the final side, he went back-to-back in the Worsfold Medal and was an important part of the club's premiership team.

Yeo continued to carry a huge midfield load in 2019, and earned his second All-Australian selection, narrowly missing out on a third-straight Best and Fairest when he finished runner-up to Luke Shuey. He led the league in tackles, recording double-figure tackles on six occasions including a remarkable fortnight in which he totalled 31 tackles against Adelaide and Melbourne. Unfortunately he struggled through 2020, showing just glimpses of his best before being forced out of the side with the cursed osteitis pubis, and was eventually ruled out for the season on the eve of finals.

Retrieved from "https://eaglepedia.fandom.com/wiki/Elliot_Yeo?oldid=34138"
Community content is available under CC-BY-SA unless otherwise noted.