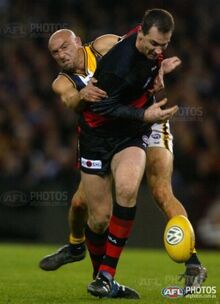 In their first finals appearance in three seasons, West Coast looked in the box seat to upset Essendon when they held a narrow lead in the third term and the Bombers were down a man with spearhead Matthew Lloyd concussed early. But Essendon rallied through Scott Lucas to take the lead heading into the final quarter and then ran away with the match, bringing down the curtain on a relatively successful debut season for John Worsfold's Eagles. Daniel Kerr and Ben Cousins each had 24 possessions and 7 clearances to lead West Coast.

"As the first half neared its frenetic conclusion, Phil Matera - beaten by Mark Johnson all day - took a powerful soccer strike but banged the ball into the post. The scores were level, but the Eagles appeared to be gathering with greater purpose.

Ben Cousins, ever shadowed by Damien Peverill, was building and starting to pump the ball consistently in the direction of the Eagles' forwards as the third term developed, and defender Adam Hunter, head bandaged from his collision with Lloyd, was consistently resolute in defence.

But so, too, was Joe Misiti's game flourishing; he amassed 34 damaging touches. In an effort to find some much-needed ``goal power", Sheedy swung Lucas into the forward line. He was as ferocious a presence there as in defence, first turning Michael Collica inside out to set up a goal to Andrew Welsh, who marked bravely with two Eagles closing in on him, then putting through an awkward snap to put the Dons ahead again.

In the end, Lucas was the forward West Coast didn't have. His three goals from his most natural position in a third quarter that yielded five to Essendon and three to the Eagles was what set the teams apart."

In the lead-up to the round the following players were listed as injured:

Chloe Saltau and Melissa Ryan, The Sunday Age (8 Septemmber 2002), "Bombers bungle, then save their best till last": http://newsstore.fairfax.com.au/apps/viewDocument.ac?page=1&sy=age&kw=moorcroft+and+caracella+and+sampi&pb=all_ffx&dt=selectRange&dr=entire&so=relevance&sf=text&sf=headline&rc=10&rm=200&sp=nrm&clsPage=1&docID=SAG0209083UV9H2GP86U

Nabila Ahmed, The Age (3 September 2002), "Your club - news on every club": http://newsstore.fairfax.com.au/apps/viewDocument.ac?page=1&sy=age&kw=chad+morrison+knee&pb=all_ffx&dt=selectRange&dr=entire&so=relevance&sf=text&sf=headline&rc=10&rm=200&sp=nrm&clsPage=1&docID=AGE020903K8UHG4P26EU

Retrieved from "https://eaglepedia.fandom.com/wiki/Elimination_Final_2002?oldid=24015"
Community content is available under CC-BY-SA unless otherwise noted.