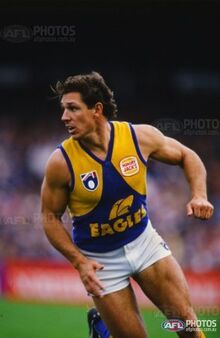 A hard-working and durable left footer, Dwayne Lamb was the first player to reach the 50, 100 and 150 game milestones for West Coast.

Lamb won three best and fairests at Subiaco and played in the Lions’ 1986 premiership before being added to the inaugural Eagles squad. He was an important part of the fledgling West Coast side, playing all but one game in the club’s first season and finishing fourth in the Club Champion award.

Playing as a defensive midfielder or a back pocket, Lamb played every game in 1988. After missing the first month of the 1989 season, he played his 50th game midway through 1989, beating teammates Michael Brennan and Chris Mainwaring to the milestone by just a week.

Lamb had perhaps his best season in 1990, playing 23 games and finishing runner-up behind Chris Lewis in the best and fairest. He was at his best in the drawn qualifying final, picking up 32 touches.

After playing his 100th game during the 1991 season, Lamb was a strong contributor to the Eagles’ 1992 premiership campaign. The stocky utility played 23 games and finished fifth in the Club Champion award. Although he had a quiet grand final, he played his part in the side’s second-half comeback and was a more than worthy recipient of a premiership medal.

Lamb played another 15 games in 1993 but age had begun to catch up with him. He played just five games in 1994 (including his 150th game, a win over Sydney) and found himself back at Subiaco for most of the season. Lamb announced his retirement late in the year, and watched on as his teammates won their second flag.

He played on with Subi for two more seasons, finishing up on 191 WAFL games to go with his 151 VFL/AFL games and 8 State games. In 1996 Lamb was named on-ball in the West Coast Team of the Decade, and was later selected on the bench in Team 20. In 2010 he was inducted into the WA Football Hall of Fame.

Retrieved from "https://eaglepedia.fandom.com/wiki/Dwayne_Lamb?oldid=28422"
Community content is available under CC-BY-SA unless otherwise noted.