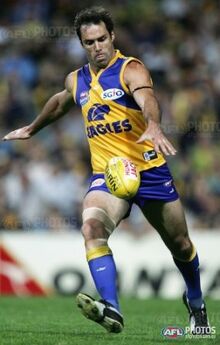 The unassuming Drew Banfield was a popular and successful player, being the only Eagle whose career spanned the premierships of the 1990s and the 2000s.

A highly-rated junior, Banfield was selected by the reigning premiers in 1992 after they somehow hoodwinked Sydney into trading the top pick in the draft for Scott Watters and Tony Begovich.

Banfield managed just 7 games in 1993, all coming in the second half of the regular season, but it was enough to win the club’s Rookie of the Year award.

The following season he played 24 games, starting on the bench in the grand final and collecting the first of his premiership medals as West Coast easily accounted for Geelong.

A tenacious midfielder early in his career, Banfield was seen as the logical successor to an ageing Dwayne Lamb. It was in 1996 after Lamb had retired that he had his best season, playing every game, averaging almost 20 touches and being crowned the Club Champion at the end of the season. Banfield almost repeated that effort in 1999, as he, Ben Cousins and Michael Braun finished a single vote behind best and fairest Guy McKenna.

After displaying remarkable resilience with injury during the first half of his career, a knee injury curtailed his 2001 after just 9 games.

Never the quickest guy in the team, as age began to slow Banfield further he moved from the midfield into the backline, where he performed impressively as a shut-down small defender. Having found himself as the sole survivor from the 1992/94 premiership teams in 2005, he played every match that season, notching up his 250th game in the preliminary final and blanketing dangerous Swans forward Nick Davis in the grand final, his second in 11 years.

Turning 32 years old during the 2006 preseason, Banfield struggled for selection and spent some rare time at Subiaco in the early part of the season before breaking into the seniors in round 9. After a qualifying final loss to Sydney, he was dropped for the semi-final but returned a week later to replace an injured David Wirrpanda. After some no doubt sleepless nights he narrowly retained his spot for the grand final, allowing him to renew his battle with Davis. The Swans goalsneak finished with 3 goals but Banfield had the last laugh, winning a second premiership medal to go with his first from 12 years before.

Banfield bowed out on a high after the 2006 season, finishing with the then-third-most games in Eagles history and a number of other accolades to go with his two premiership wins.

As well as a short stint doing special comments on Fox Footy, Banfield won another premiership medal in 2011 as a member of the University A-Reserves amateur side.

Retrieved from "https://eaglepedia.fandom.com/wiki/Drew_Banfield?oldid=33328"
Community content is available under CC-BY-SA unless otherwise noted.