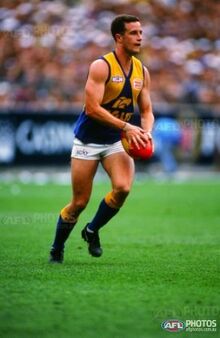 Tenacious midfielder Don Pyke had a lesser profile than some of his better-known teammates but still received his share of accolades before injury brought a premature end to his career.

One of the few AFL footballers born in the USA, Pyke arrived at the Eagles after winning a best-and-fairest at Claremont as a 19 year old.

An attacking rover early in his career, Pyke made an immediate impact with 21 touches and 2 goals against the Bombers on debut. He finished his first year with 14 goals from 16 games.

Pyke managed just 4 games in 1990, but bounced back in 1991. Retooling himself as a stopping midfielder, Pyke played 24 games and was one of the Eagles’ best in the grand final loss to Hawthorn.

His 1992 season was interrupted by injury, but he returned in time for the finals series. In the grand final, he was flattened by Gary Ablett senior in the first quarter but inspirationally returned to the field and ended up with a premiership medal.

Although West Coast didn’t repeat their success in 1993, Pyke had a fantastic year, eventually tying with big Glen Jakovich for the best and fairest. He finished runner up to Jakovich in 1994, and both of them ended up with their second premiership medal.

He continued his good form throughout 1995. Unfortunately, a serious shoulder injury ruined his 1996 season and led to his retirement at the end of the year at the tender age of 27.

Following his retirement, Pyke remained involved with West Coast as a runner and later a director. He also served as Claremont’s head coach and an assistant at Adelaide before quitting to pursue business interests.

In 2014, he returned to the club as an assistant coach under new senior coach Adam Simpson, with responsibility for stoppages and strategy. After two years in that role he was appointed as Adelaide's head coach for 2016, replacing the late Phil Walsh. Pyke led the Crows to a grand final in 2017, before stepping down at the end of the 2019 season.

News: Pyke returns as an assistant

Retrieved from "https://eaglepedia.fandom.com/wiki/Don_Pyke?oldid=31240"
Community content is available under CC-BY-SA unless otherwise noted.