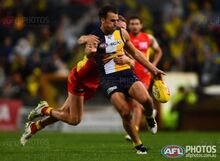 A talented all-round midfielder from Kalgoorlie, Dom Sheed won the Larke Medal as the best player at the 2013 national under-18 carnival before being drafted to West Coast, where he became a premiership hero.

West Coast were said to be very keen on Sheed well out from the draft - the downgrade of pick 6 to pick 11 may have been done in the belief that he would still be available after the top 10. If so, the ploy worked, with Sheed joining the club he supported as a kid and given the retiring Daniel Kerr's number 4.

The Subiaco product came on slowly in his rookie season. After making his debut in the opening round Sheed spent the middle part of the season learning his trade at East Perth before winning back a senior spot, eventually finishing with 10 AFL appearances for the year (starting 5 of them as the sub).

Sheed developed in leaps and bounds in 2015, becoming a regular member of the midfield, playing 23 games and averaging just a touch under 20 disposals a game. He was a clear winner of the club's Rookie of the Year award as well as finishing third in the league-wide Rising Star award.

Expected to build on that performance in 2016, Sheed instead had a horror start to the season. After missing the pre-season with a knee injury, he injured his pectoral muscle in his first hitout for East Perth. Just as he was about to return he hurt his knee again. Sheed eventually made it back late in the season to play the last six games. After a slow start to 2017 he found form mid-season, putting together a series of strong games in the midfield as the club pushed into the finals.

Sheed had an up-and-down season during 2018. Earmarked as one of the players to fill the breach left by the retirements of Matt Priddis and Sam Mitchell, Sheed's form wavered and he found himself dropped to East Perth on multiple occassions. The suspension of Andrew Gaff handed him one last opportunity which he took with both hands, putting in a number of strong performances during the finals series culminating in his clutch game-winning goal late in the Grand Final. Sheed carried that momentum into 2019, playing an integral part in the Eagles' engine room. He played every game, making his 100th appearance late in the year and smashing his previous career bests in both possessions and clearances, and was recognised with his first top-ten finish in the John Worsfold Medal.

Retrieved from "https://eaglepedia.fandom.com/wiki/Dom_Sheed?oldid=35285"
Community content is available under CC-BY-SA unless otherwise noted.