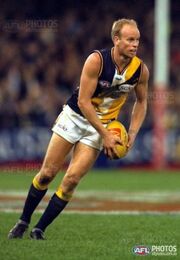 A beautifully-skilled and tough as nails midfielder, “Tommy” Kemp was a captain of the club and won almost every accolade possible in his distinguished career.

Hailing from the Goldfields, Kemp somehow slipped through until the very last handful of picks of the 1989 VFL draft when West Coast, given the chance to top up their list after all other clubs had finished drafting, grabbed him along with Tony Begovich and Brad Gwilliam.

The sandy-haired kid was an instant hit, playing in 23 of a possible 26 games in his first season and finishing equal 5th in the Club Champion award. Unsurprisingly he took out the Rookie of the Year award, ahead of fellow Subiaco product and good friend Brett Heady.

Upgraded to the number 2 jumper in 1991 following the retirement of John Annear, Kemp played another 23 games in his sophomore year, finishing in the top 10 in the best and fairest.

Despite an impressive record to that point, 1992 was Tommy’s real break-out year with the skilled mid playing every game, averaging nearly 22 possessions a game and easily winning the Club Champion award. Kemp was rewarded for his big year by being selected on a wing in the All-Australian team and was among the Eagles’ best in the grand final win over Geelong.

After an injury-interrupted 1993, where he played just 17 games, 1994 saw Kemp return to, if not his 1992 form, then at least something approaching it. There was certainly no faulting his performance in the grand final, with the gun centreman kicking 2 goals to go with his 23 possessions in a Norm Smith Medal-winning performance.

Kemp came close to winning a second Club Champion award in 1995 and again in 1997, finishing runner-up in both years (to Glen Jakovich and Peter Matera respectively). 1998 and 1999 were down years for Kemp, relatively speaking, although ’99 was notable for the popular on-baller playing his 200th game (unfortunately marked with a loss to St Kilda) and being awarded the Best Clubman medal.

Tommy had a third runner-up finish in the Club Champion award in 2000, again finishing just behind Jakovich. He also had his best result in the Brownlow Medal count, catching the umpires’ eye with a series of possession counts in the high 30s, including a career-best 38 against Hawthorn.

With the retirement of Guy McKenna at the end of the 2000 season, Kemp was named co-captain for 2001, the idea being that he would be a senior figure to help guide his very young co-captain (a 22 year old Ben Cousins) through the season. Sadly, a series of concussion-related injuries resulting from Kemp’s unflinching style of play over the years, intervened and limited him to just 9 games as captain. Late in the year, Kemp tearfully announced his retirement from AFL football.

Dean “Tommy” Kemp finished his 243-game, 12-season Eagles’ career with two premiership medals, a Norm Smith Medal, an All-Australian jumper, a Club Champion award (along with three runner-up finishes and four more finishes inside the top 10), a Best Clubman award and a Rookie of the Year. The famous dual premiership lineup of Matera-Kemp-Mainwaring remains one of the best centrelines boasted by any club, and was reflected in both the Team of the Decade in 1996 and Team 20 in 2006. Kemp was inducted into the WA Football Hall of Fame in 2005, the AFL Hall of Fame in 2007 and the West Coast Hall of Fame in 2011.

In retirement, Kemp has set up camp in the state’s South West. He currently runs a football camp for kids in regional areas.

Retrieved from "https://eaglepedia.fandom.com/wiki/Dean_Kemp?oldid=28642"
Community content is available under CC-BY-SA unless otherwise noted.