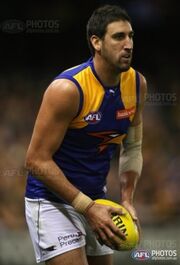 Champion ruckman Dean Cox is one of the greatest rookie draft picks in history, going on to become a multiple All-Australian and arguably the best ruckman of the modern era.

Originally from Dampier, Cox was plucked from obscurity in the 2000 rookie draft. He spent the 2000 season playing for East Perth, winning the Simpson Medal for his role in the Royals' grand final victory, and was promoted to the senior list for the following season.

Making his debut early in 2001, Cox spent the next few seasons learning the ruck craft as a backup to Michael Gardiner. When Gardiner went down with a foot injury early in 2004, Cox stepped up as lead ruckman, playing every game and finishing third in the club's Best and Fairest award, the first of what would be many top-10 finishes.

Cox quickly became one of the league's premier ruckmen, impressing with his ability to not only win the tap but also to act as a "fifth midfielder" when the ball hit the ground. He was named in the All-Australian side in 2005, and again finished in the top three in the best and fairest. He made the All-Australian side again the following year despite missing five games mid-season with a broken collarbone, and was among his side's best in the victorious Grand Final.

Continuing his run as the best ruckman in the league, Cox was named All-Australian in both 2007 and 2008. Overlooked for the captaincy following the departure of Chris Judd, Cox responded with a huge 2008 to win a much-deserved Club Champion medal.

Unfortunately injury struck in 2009, with Cox missing most of the second half of the year due to a groin complaint. He bounced back in 2010 to have a solid season in what was a poor year for West Coast, finishing fourth in the best and fairest although he was unable to win back his All-Australian position. Cox fixed that in 2011 as he played every game and formed a dynamic ruck partnership with youngster Nic Naitanui, with the pair integral in the side's surprise push deep into the finals.

Naitanui joined Cox in the All-Australian side in 2012, which marked an amazing sixth representative honour for the popular veteran. Playing more time forward than in seasons past, Cox kicked a career-high 28 goals for the season including setting a new personal best of 5 against St Kilda.

Despite playing every game for the fourth successive season, the champion ruckman started to show his age at times during 2013. Forced to shoulder more of the ruck burden than the club would have liked due to Naitanui struggling through injury, Cox did turn out a few vintage performances and finished fourth in the John Worsfold Medal, the seventh time he had polled in the top four.

Cox passed Glen Jakovich to become West Coast's games record holder early in 2014, but was clearly on his last legs. With understudy Scott Lycett outperforming him (and being headhunted by other clubs), Cox found himself left out of the side on a number of occasions, which resulted in his club-record consecutive games streak ending at 104. Cox eventually announced his retirement at the end of the year, and was given a fittingly big sendoff in his final game.

Cox stayed with the club after his playing career ended, joining Adam Simpson's panel as an assistant coach. He left at the end of 2017, after 18 years at West Coast as a player and coach, to join Sydney.[1]

Retrieved from "https://eaglepedia.fandom.com/wiki/Dean_Cox?oldid=33004"
Community content is available under CC-BY-SA unless otherwise noted.