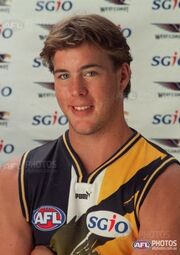 A burly key forward from Peel Thunder, Dean Buszan spent one year on West Coast's rookie list but did not play a senior game.

"Buzz" kicked 32 goals in 9 games with the lowly Peel Thunder outfit in 2000 before being given a spot on West Coast's rookie list.

Playing for East Perth under the host team arrangement, Buszan led the Royals' goalscoring in 2001, kicking a bag of 9 against West Perth on Foundation Day and equaling that effort against his old team later in the season. Despite those efforts, he was delisted at the end of the year.

Buszan stayed at East Perth for another couple of years, winning flags in 2001 and 2002, before returning to Peel. He retired in 2010.

Retrieved from "https://eaglepedia.fandom.com/wiki/Dean_Buszan?oldid=20571"
Community content is available under CC-BY-SA unless otherwise noted.