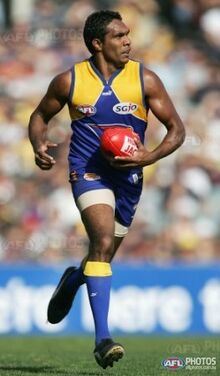 The silky-skilled Wirrpanda played primarily as a sweeper across the backline during his 14-year Eagles career, but was also useful as a dangerous small forward.

Wirrpanda (whose name was incorrectly spelt “Wirrpunda” until 2005) was taken by West Coast as a compensation selection in 1995, after Fremantle had signed the uncontracted Tony Godden. He made his debut early in 1996, the only 16 year old to have appeared at senior level for the club. Due to injury Wirrpanda managed just 12 games in his first three seasons, and only a handful more for East Perth.

Wirra had something of a breakout season in 1999, cementing himself in the backline and playing every game. He finished fifth in the Club Champion award that year, just two votes behind winner Guy McKenna. After playing just eight games in 2000 due to injury, he bounced back in 2001 to play 21 games.

In 2002, Wirrpanda began to be swung into the forward line to great effect, kicking a bag of 5 against Hawthorn and finishing with 26 goals for the year, behind only Phil Matera and Troy Wilson.

After an indifferent 2004, during which he struggled for form and was even dropped to the WAFL on one occasion, Wirrpanda had a career-best season in 2005. Playing the role of backline sweeper with aplomb, Wirra was named in the backline in the All-Australian team. He played 20 games for the year, including the losing grand final.

Wirra was again a fixture in the backline in 2006, save for the preliminary final which he missed due to a hammy injury. He was passed fit to retake his place for the grand final, meaning someone had to receive bad news and in this case it was young defender Jaymie Graham, who had played 24 out of 25 games to that point. Wirrpanda wrote Graham’s #22 on his hand so that the unlucky player could still be on the field in some form.

In 2007 Wirrpanda, who had begun to slow a little, again spent plenty of time in the forward line where his class and goal sense proved more than handy as he kicked 25 goals for the year. Wirra played his 200th game during 2008, with the struggling Eagles turning in a winning performance against the Crows to honour the popular veteran.

The ageing Wirrpanda was clearly slowing in 2009, but was still a valuable presence in the backline. He played 18 games for the year, missing the final round due to the birth of his son, but nevertheless finished in the top 10 in the Club Champion award for the eighth time in his career.

After retiring from AFL footy Wirrpanda signed with East Perth, but managed only two WAFL games in 2010.

Away from the field, Wirrpanda has established the David Wirrpanda Foundation, a charity dedicated to improving the lives of indigenous youths. He has also entered politics, unsuccessfully contesting the 2013 Federal election as a National Party candidate.

Retrieved from "https://eaglepedia.fandom.com/wiki/David_Wirrpanda?oldid=33366"
Community content is available under CC-BY-SA unless otherwise noted.